What a surprising creation this soup is!! Elegant, classic, and extremely tasteful!! Came about just by chance, which I briefly said in the intro.

Since my discovery, I have seen it several times on other sites. Maybe not several but a couple, anyway. It sort of burst the bubble of my discovery; thinking I fell upon this scrumptious new soup concoction; which was my creation. Or I thought so…

That’s okay we all have our own spin on it.

Cauliflower has such a subtle delicate flavor. It is really the perfect vegetable for a creamed soup.

Cauliflower is not only pretty and elegant it’s loaded with nutrition. It is a cruciferous vegetable that is naturally high in fiber and B-vitamins. It provides antioxidants and phytonutrients that can protect against cancer. It also contains fiber that helps with weight control and its low in carbohydrates.

Cauliflower is considered one of the superfoods because of the nutrient-rich content. It protects cells from DNA damage. The Linus Pauling Institute, a research group focused on health maintenance recommends a weekly serving of five cruciferous vegetables.

Cauliflower is primarily a cool-season vegetable but it is easy to obtain most any time of the year. After purchase, it will keep in the refrigerator for up to a week in a paper or plastic bag.

There are many new ways that cauliflower is being used. Since it is so low in carbohydrates it has been used as a stuffing after being riced; great for stuffing peppers.

It’s been used for pizza crust, which I will say for myself it’s very good that way since I’ve made it myself and it worked beautifully. Now you can actually purchase the cauliflower pizza shells in the frozen food section in the grocery store.

Also good steamed and then mashed substituting for potatoes which are high carbs. Another way is in an Italian pickled concoction called giardiniera, something I must really try making myself. It is really delicious, one of my childhood favorites.

There really is a lot to explore with the vegetable, cauliflower. As a crudita (a pickled combo of vegetables), steamed, used in the preparation of lo-carb pizza shell or as in soup which I pleasantly discovered merely by accident. I hope you give it a try and let me know how it all works out for you. Until then, Mangiare in Buona Salute!! 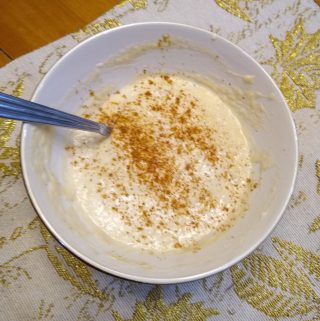 If you like cauliflower you will love this unlikely soup. I accidentally discovered this soup. If you remember I mentioned to you how I hate to waste, so it was this one day I was taking inventory of what I had in the fridge and wah-la! To my surprise, I had leftover sauteed cauliflower from just a few days before but it totally slipped my mind and I looked at it and thought to myself "I can't let this go, I need to make something with it." I just got a new immersion blender and I was anxious to try it so that's how "Zuppa di Cavolfiore" was created. Never did I know there were actual real recipes created already. So I started by using the immersion blender on the already cooked cauliflower which also was cooked with shallots and garlic pulverizing it and then putting all of it in a saucepan. To that, I added the rest of the ingredients and let it come to a slow boil and brought it down to a simmer cover with a lid and let it cook for about a half an hour. It just was so delightful and had such an elegant flair to it.This soup was a pleasant surprise to our palates. It is the kind of soup you would want to serve as one of your first courses at a dinner party complemented by either a veal, chicken, or fish as the main course. Just to give you a few ideas of what would go well with this most unexpected surprising soup.
Print Recipe Pin Recipe
Cook Time 45 mins
Course Soup
Cuisine American, Italian
Servings 6

You are going to let the cauliflower cook until fork tender.

Keyword cauliflower, Italian, soup
Tried this recipe?Let us know how it was!