I hope you like this “warm your inners” corn chowder!! It’s rich in flavor, has a little bit to bite into with the ham and bacon and the combination of the spices and richness of cream and milk will just soothe away any anxiety that comes with today’s world we live in.

When executing this recipe if you do not have cream in your fridge don’t sweat it you can just substitute another cup of milk, or if you have half and half you can add that in place of the cream. I had ham left over in the freezer so that is why there is ham in the corn chowder. You can eliminate the ham if you do not have it in the house at the time you want to make this chowder.

I remember the first time I had corn chowder, it was my Mom, Josie, who had introduced me to it. One day, I was at her house a little while after she had gotten home from work and she had cooked up a small pot of corn chowder, I had some with her and thought wow this is really good! I said, “How come, Mom, you never made this for us growing up, why not, because it is really good!” She just said, “oh, I don’t know; this is just something I whipped up, to have something fast”. I said “Mom you always surprising me” and continued to tell her how she always seemed to do that to me and my sister.

So, I highly suggest you to give this chowder a try, and let me know; send me your pictures and I’ll post them. Hope it all goes well, and let me know what your family has to say about your creation, best of luck!! A buona salute e buon cebo!! 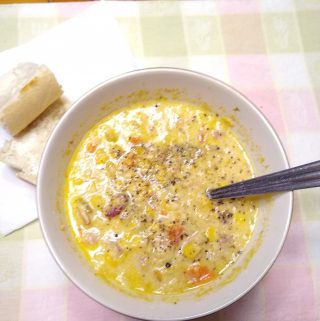 If you could imagine a cute little farmhouse, out in the country, at the end of a country road, then you have a good idea where this chowder would be a simmering! The farmhouse is built at the end of a winding driveway, with some chickens pecking around, and a dog barking as you enter the driveway, then you've got a good idea of where this corn chowder had its beginnings.That all sounds very possible but that's not where I created my corn chowder, of course, it was in my kitchen. I may have a country setting but I do not have chickens and right now I do not have a dog, but I do want to adopt one.I just thought that is probably where you might see some corn chowder steaming away and I thought it would set the mood for this "wholesome stick to your ribs" kinda meal.It's really a simple chowder to put together; I consider it a pantry/freezer recipe. As you check out your pantry you are standing there and looking in, saying "what can I put together?" And there it is, creamed corn, right there, your mind is beginning to conceive this recipe.It's a matter of just creating, and you can do it, very simple, and here we go!
Print Recipe Pin Recipe
Course Dinner,
Cuisine American

Keyword chowder, corn,
Tried this recipe?Let us know how it was! 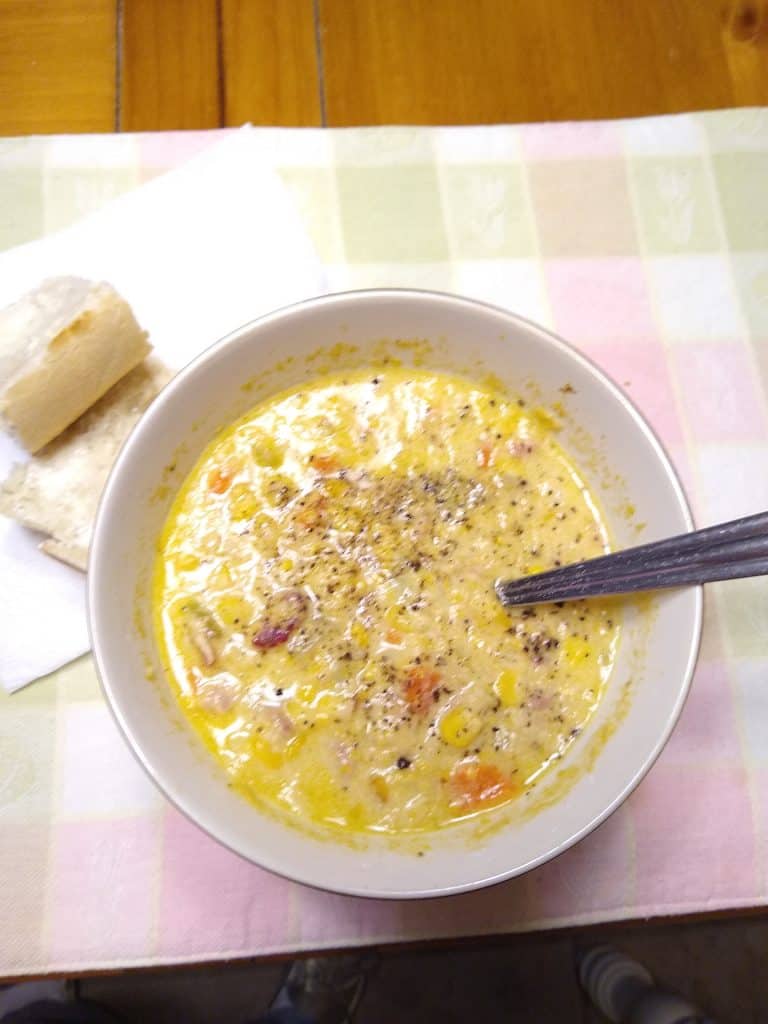