This is a hardy Italian dish which is not only vegetarian but also extremely very satisfying.  This recipe has its history.

My father loved “” which they called it. This is how you knew an Italian was talking about escarole.  It was pronounced “ ” and my Dad would ask for it quite often.

My mother would not like to make it as often as my father used to ask for it.  Reason being it was “A lot of work”.  The produce then never came as clean as it is today since they have refined all the steps in the farming industry.

When my Mom would purchase it, it was like it just came out of the field; full of sandy dirt. Mom would have to chop and rinse it not just once but several times, which meant soaking in water, removing it from the water, replacing the water and going through those steps many times until the water would be clear of any traces of sand.

So as you can see it was not a simple task.  Today you still have to clean it but not like my Mom would have to.

Today when I get escarole I usually buy 3 or 4 heads so to reduce that task of washing it so many times. And in doing so  I will put it in the freezer and it will be ready for future use.

Funny thing, my daughter does not like this job since it’s so involved, but my granddaughters love it so I will usually make extra and bring it over for them.  Isn’t that what grandmoms do anyway!?!

I hope you will attempt this dish and accept the challenge.  If you can make this dish then I’d say you probably could take on many Italian dishes since a lot of them are involved.

But that’s not to say I will not be posting easy dishes which are still Italian.  Actually, I will have a ’30 minute meals category” which will have some very tasty Italian meals. 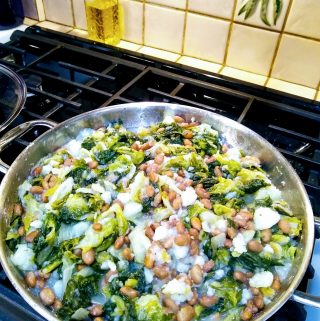 Keyword beans, escarole, Italian, potatoes
Tried this recipe?Let us know how it was!